Interns Virginia Whitman and Sarah Zerbonne worked with mentor Giselle Mora and park rangers at Catoctin Mountain Park in Thurmont, MD to effectively communicate the park’s efforts to mitigate climate change and inspire others to make changes in their own lives. Specifically, the project was to develop webpage and social media content to highlight their efforts as a Climate Friendly Park (CFP), as well as the impact of a changing climate on the park’s native brook trout. For the CFP component, they created an informational video that describes why recycling and composting are climate friendly actions. To highlight the brook trout story, they produced an infographic that allows website visitors to scroll over an image of the park and learn about the various impacts of climate change on the forest and stream ecosystems. Check out the webpages we developed here! 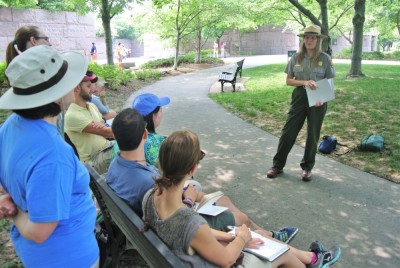 Interns Laura Hellmich and Nick Stasiak, and mentor Jenell Walsh-Thomas worked with rangers at the National Mall and Memorial Parks to develop a ranger climate communication toolkit. This toolkit was designed to be an easy to use resource for successful incorporation of messages about climate change in the Tidal Basin for ranger talks and programs. The toolkit sections emphasized the historic and current stories about climate change for the Jefferson Memorial, Franklin Delano Roosevelt Memorial, and the Martin Luther King, Jr. Memorial through visuals, written stories, and resource pages. Future climate change communication strategies for the Climate Friendly Parks program and improvement of the current recycling efforts in the park were also a part of the project at the National Mall and Memorial Parks.

Interns Christian Kamrath and Spencer Schecht worked with mentor Melissa Clark and park staff to develop content for three webpages for the Prince William Forest Park website. The cohort identified ways to integrate lessons and concepts on how the park is being influenced by climate change and how these impacts are affecting visitors’ experiences within the park. Additionally the group assembled highlights from the park’s efforts to meet its Climate Friendly Parks goals for an engaging website and video featuring actual park rangers and interns. The team was allowed creative freedom to identify the most effective way to capture the park’s audience in a compelling mosaic of history, culture, and science of the park. Informative and interpretive webpage texts were produced as well as an infographic design to illustrate the impacts of climate change on the parks valuable recreational opportunities.Check out the the webpages that were developed here!

The 2014 multimedia team, Sarah Erickson and Jazmin Garcia, worked with Catoctin Mountain Park, Prince William Forest Park, and the National Mall and Memorial Park teams to create visually compelling infographics, videos, photographs, and web pages. All team members worked closely to ensure that the media that was created was accurate, informative, and entertaining. Many of these products can be seen on Catoctin and Prince William’s websites and Facebook pages, as well as the National Mall’s Facebook page and all YouTube pages.