Alaska’s Arctic National Wildlife Refuge (ANWR) has been protected from oil and gas drilling for decades. Recently, however, the Trump administration announced their plan to open up the ANWR’s 1.6 million-acre coastal plain to oil and gas exploration. The Tax Cuts and Jobs Act of 2017 contained a provision allowing oil and gas drilling in this fragile ecosystem, and although the U.S. House of Representatives recently passed a bill to reverse the provision, it is not expected to pass the Senate or be signed by President Trump. 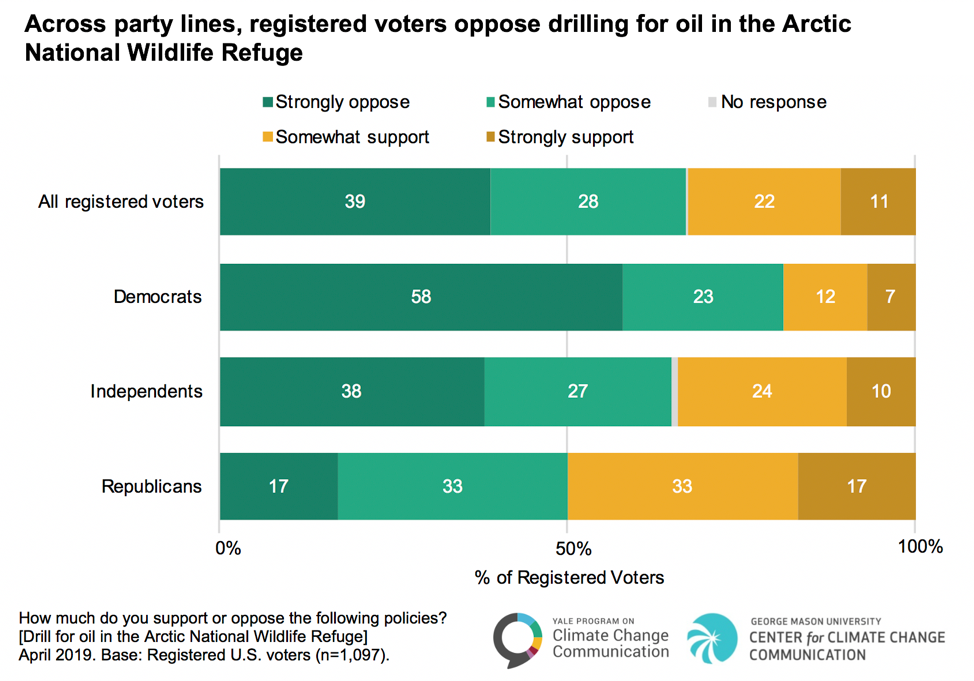 The Arctic National Wildlife Refuge is home to many species, including polar bears and migratory birds, and global warming is already impacting the refuge. According to a report recently released by the U.S. Department of the Interior Bureau of Land Management, “many species that nest in the Arctic Refuge Coastal Plain already are experiencing decreasing populations, and many could suffer catastrophic consequences from the effects of global climate change.” These effects in combination with oil and gas exploration could have several impacts on the ecosystem and habitats in the refuge.

The data included in this report are based on the April 2019 Climate Change in the American Mind survey—a nationally-representative analysis of public opinion on climate change in the United States conducted by the Yale Program on Climate Change Communication and the George Mason University Center for Climate Change Communication. Using the Ipsos (formerly GfK) KnowledgePanel®, a representative online panel of U.S. adults (18+), surveys were conducted March 29 to April 8, 2019 (N = 1,291; including 1,097 registered voters). All questionnaires were self-administered by respondents in a web-based environment. Data are weighted to align with U.S. Census parameters. For tabulation purposes, percentage points are rounded to the nearest whole number. For more information on survey methods, please review the Politics & Global Warming April 2019 report.

All Categories, Climate Notes
No tags