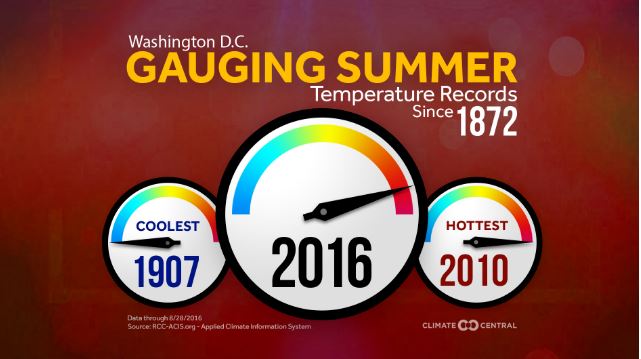 This graphic from Climate Central shows the years in the D.C. region that had the hottest and coolest summers on record. Climate Central then ranked each year’s average summer temperature relative to those two extremes.

"Evidence for changes in Earth’s climate can be found from the top of the atmosphere to the depths of the oceans."

"Researchers from around the world have compiled this evidence using satellites, weather balloons, thermometers at surface stations, and many other types of observing systems that monitor the Earth’s weather and climate. The sum total of this evidence tells an unambiguous story: the planet is warming."

“U.S. average temperature has increased by 1.3°F to 1.9°F since record keeping began in 1895; most of this increase has occurred since about 1970. The most recent decade was the nation’s warmest on record. Because human-induced warming is superimposed on a naturally varying climate, the temperature rise has not been, and will not be, uniform or smooth across the country or over time." 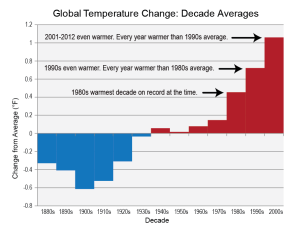 While surface air temperature is the most widely cited measure of climate change, other aspects of climate that are affected by temperature are often more directly relevant to both human society and the natural environment. Examples include shorter duration of ice on lakes and rivers, reduced glacier extent, earlier melting of snowpack, reduced lake levels due to increased evaporation, lengthening of the growing season, changes in plant hardiness zones, increased humidity, rising ocean temperatures, rising sea level, and changes in some types of extreme weather.”