"The global warming of the past 50 years is primarily due to human activities, predominantly the burning of fossil fuels."

"In the past, climate change was driven exclusively by natural factors: explosive volcanic eruptions that injected reflective particles into the upper atmosphere, changes in energy from the sun, periodic variations in the Earth’s orbit, natural cycles that transfer heat between the ocean and the atmosphere, and slowly changing natural variations in heat-trapping gases in the atmosphere.

"All of these natural factors, and their interactions with each other, have altered global average temperature over periods ranging from months to thousands of years. For example, past glacial periods were initiated by shifts in the Earth’s orbit, and then amplified by resulting decreases in atmospheric levels of carbon dioxide and subsequently by greater reflection of the sun’s energy by ice and snow as the Earth’s climate system responded to a cooler climate." 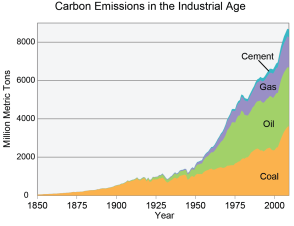 "Natural factors are still affecting the planet’s climate today. The difference is that, since the beginning of the Industrial Revolution, humans have been increasingly affecting global climate, to the point where we are now the primary cause of recent and projected future change."

"The majority of the warming at the global scale over the past 50 years can only be explained by the effects of human influences, especially the emissions from burning fossil fuels (coal, oil, and natural gas) and from deforestation.”